Start a Wiki
Black Chompers are extremely aggressive creatures in Darkwood. They attack the player during dream sequences and the Prologue. One black chomper will also appear behind a locked door if the player messes with the radio in the basement of the Epilogue, but cannot attack the player.

They are pitch-black carnivores that emit a dark, inky miasma. They attack on sight and are the stronger, more aggressive version of the Red Chomper.

The fact that these are essentially stronger Red Chompers and the player won't be able to face one with their preferred gear or any healing items makes them difficult to deal with, but the basic method is the same; don't get cornered and keep your distance, sprint/dodge out of the way of their lunging attack then punish with a charged hit. Four or five good hits should do it.

The Black Chomper in the Church Dream. 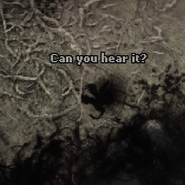 Black Chomper from the Grave Dream.
Add a photo to this gallery
Retrieved from "https://darkwood.fandom.com/wiki/Black_Chomper?oldid=25699"
Community content is available under CC-BY-SA unless otherwise noted.