Due to an update in Darkwood, this article may require updating. You can help Darkwood Wiki by editing it.

The Burned Cottage is a major location in the Swamp biome, residing outside of the Player Map border.

The cottage itself is accessed by entering an underwater corridor, requiring a filled Oxygen Tank, found on the swamp border in an unmarked location. While the entrance will not be marked on the player map, it can be distinguished from the remnants of an old road and an abandoned, broken wagon sunken and a destroyed, overgrown house nearby. However there is a map located in The Swamp Village that will show the location on the protagonist's map.

On the other side of the underwater corridor is a flooded mass grave with a trio of wooden crosses.

The front door to the Burned Cottage is locked, but the walls have crumbled, so access is still relatively simple.

There are two photos inside of the cottage: One of a village full of people, and one of a helicopter, both in a forest area. Picking the first one up will trigger Human Spiders to spawn outside and block up the main entrance with a wardrobe. Under unknown circumstances, one of them will scream:

And it's also the one that carries the Key from the Burned Cottage, which unlocks the cottage's metal door. 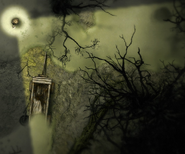 The ruined wagon, as well as the underwater corridor faintly visible in the top-right corner. 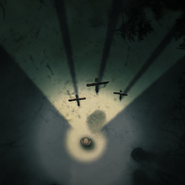 A trio of wooden crosses near the underwater entrance. Upon examination, "May you never know hunger again." is a readable epitaph in all three of them.

"Some skeletons have been pushed out by the water and are now lying in the mud."
Add a photo to this gallery
Retrieved from "https://darkwood.fandom.com/wiki/Burned_Cottage?oldid=23954"
Community content is available under CC-BY-SA unless otherwise noted.