Start a Wiki
This article is a stub. You can help Darkwood Wiki by expanding it.

The Camp (Banshees) is a major location in the Swamp.

It is a location on one of the edges of the map: a hidden pathway next to an overgrown combine leads to a canyon with a single fallen tree serving as a bridge. Past the bridge is a very dark meadow with a banshee and several banshee babies.

Two clusters of mushrooms can be found on the corpses of deer.

The following day after the player has visited a camp near the entrance of the Radio Tower, the Doctor can be found here, curled up in a fetal position next to a figurine made out of mud and sticks with a Shiny Stone in its head.
If approached, he will slowly crawl back to a campfire and grab a torch, get up and attack the player. When killed, he drops the Doctor's Notes, Map (Doctor) and a Staff. 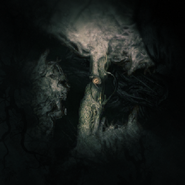 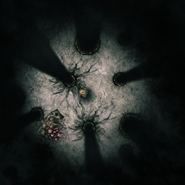 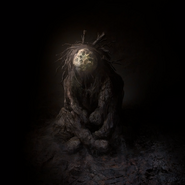 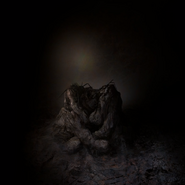 The figurine once the Shiny Stone is removed.

The Doctor attacks the Protagonist with a torch.
Add a photo to this gallery
Retrieved from "https://darkwood.fandom.com/wiki/Camp_(Banshees)?oldid=23738"
Community content is available under CC-BY-SA unless otherwise noted.