For other locations, see Cottage (disambiguation).

The Cottage (C) is a minor location found within the Silent Forest. It is a small house that has been overgrown by the thick, winding trees and foliage. There are only two rooms remaining and the generator outside is broken.

The path inside is hidden until approached and winds around the rear into a large, mostly empty room. There is a shelf at one of the walls and a corpse on the floor, the corpse contains the Chest Key required to open the crate in the Silent Forest Hideout's generator room.

The smaller room off to the side has an aggressive villager hiding just behind the door. He will attack the moment the room is entered and he drops nothing when killed. There is a picture on the wall with Fabric hidden behind it and a crate opposite the door. This crate will always contain a Toolbox. 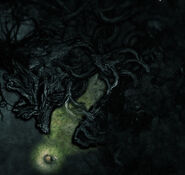 Revealing the entrance to Cottage (C), as seen in-game.

Cottage (C) will always spawn at this spot on the map.
Add a photo to this gallery

Retrieved from "https://darkwood.fandom.com/wiki/Cottage_(C)?oldid=25387"
Community content is available under CC-BY-SA unless otherwise noted.