The area is grey, slimy, and filled with snails, white, organic cords, and snail people. A side path should lead to a pond which has two Fishes inside. In the central area there is a house with a large shell embedded in the roof. The player can enter this shell, where they will find a character called Snail. There is a Shed Key in the Snail's hand.

The house itself can only be entered by following and completing the Snail's quest, or by killing the Snail and climbing through its stomach. The player will then be able to enter the house (which acts as a gateway location). Inside is a small room with a dead body connected to a radio by small vines.

With the Shed Key the player will be able to access a side area. It has a cocoon like object, which can be broken, to free the Snail and the snail people.

Following the Snail's questline seems to cause all of the snail people to get crushed by the Snail or possibly go free (more likely the former). 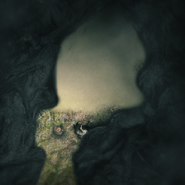 The Fish pond and the Doctor 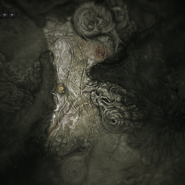 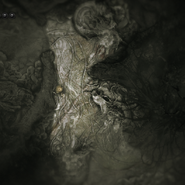 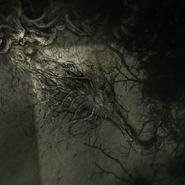 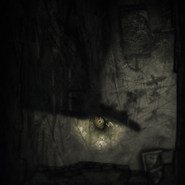 Vision of the Radio Tower, similar to the one seen in the Swamp Hideout
Add a photo to this gallery
Retrieved from "https://darkwood.fandom.com/wiki/Cottage_near_the_Junkyard?oldid=25496"
Community content is available under CC-BY-SA unless otherwise noted.