The Human Spider is an aggressive creature that appears to be made of multiple merged human bodies, in a similar fashion to other creatures present in Darkwood.

Human Spiders are mostly found randomly roaming around the Swamp. They can be mobile, which makes them difficult to outrun if they spot the player and give chase.

In the Swamp, like for the other Swamp creatures, it is possible that there is a shrine made of human bodies.

Human Spiders don't have much health or damage, but stick to you very well if you're not looking at them, thus when the Human Spider throws a torso, the player should try to keep both the torso and the Human Spider in his vision, otherwise the player will probably take some damage from one of the spiders before he can get both of them in his field of vision. When they're being looked at, they're very slow, so even with multiple Human Spiders, as long as they're all being looked at, they shouldn't be too difficult to take out. The player should go on the offensive when fighting these; if they throw a torso, the player can finish the original Spider before the other one forms. The Spiders are also able to dodge to the side when being shot at, making them somewhat difficult to hit with a handgun. 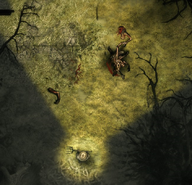 A Human Spider about to hurl a torso at the player. 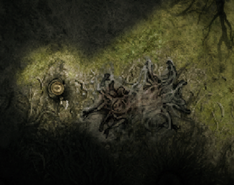 Add a photo to this gallery
Retrieved from "https://darkwood.fandom.com/wiki/Human_Spider?oldid=24923"
Community content is available under CC-BY-SA unless otherwise noted.