It details an evacuation attempt from what is presumably the Swamp Hideout to the Radio Tower:

"2215 hours. Two people came via the tunnel from the hideout near village 3C. They were attacked.


2310 hours. The hideout near village 3C has been compromised. At least 12 locals have entered the hideout's cellar. Mostly mud-covered savages. 3 among them were wearing unusual clothing - weird rags. We lost one man. The door to the tunnels has been shut. None of the locals managed to break through further. We're getting ready for evac.

0130 hours. Evac successful. The door was locked with a code. We're going home." 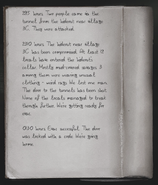 The Journal from the Radio Tower
Add a photo to this gallery
Retrieved from "https://darkwood.fandom.com/wiki/Journal_from_the_Radio_Tower?oldid=23423"
Community content is available under CC-BY-SA unless otherwise noted.