This article is a stub. You can help Darkwood Wiki by expanding it.

Not to be confused with Markings (Chapter 1).

The Markings are minor locations in Darkwood.

The Markings are located at the Swamp. They are a series of mysterious geometrical drawings and symbols which appear to have been scratched on the ground.

Someone has placed some white mushrooms around the body. The two largest ones have been carefully inserted into the dead man's eyesockets.

Hundreds of dead insects lie scattered around the body, but they didn't just die here. Someone has carefully prepared this scene. A giant dead centipede has been placed on the dead man's face, along his nose.

The body is completely overgrown with roots. A dead lizard protrudes from the corpse's mouth. Judging from the stuffed cheeks and neck, more of them can found in the throat. 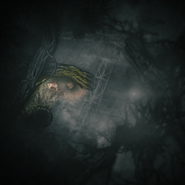 Vision of the Radio Tower 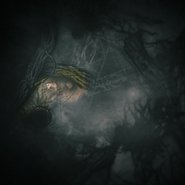 Add a photo to this gallery
Retrieved from "https://darkwood.fandom.com/wiki/Markings_(Chapter_2)?oldid=22462"
Community content is available under CC-BY-SA unless otherwise noted.