The Mayor's House is a minor location in the Silent Forest Village.

Outside the house an older woman can be found banging incessantly on a window, angrily decrying the Mayor for not supplying her enough meat rations. The Mayor will irately explain that the Sow is no longer producing enough meat. This is likely due to the Sow starving, as the cables were cut and the Pig Farmer is dead.

The house itself cannot be accessed. It has two locked metal doors, one of which would lead into the Mayor's room, and one of which leads to a set of stairs. Both doors require a key (said key has not currently been found). If the player attempts to open either of them the Mayor will, in his frustration, tell the player to leave, before he lets loose "Antek". After that point the guttural growl of a Red Chomper can be heard in the house. 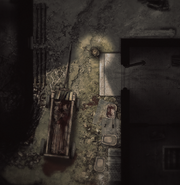 The empty wheelbarrows seen outside the Mayor's house.
Add a photo to this gallery
Retrieved from "https://darkwood.fandom.com/wiki/Mayor%27s_House?oldid=25853"
Community content is available under CC-BY-SA unless otherwise noted.