The Mushroom Man appears to be a human with several fungal growths sprouting from its head and shoulders. It ambushes the player by hiding as normal poisonous mushrooms, only showing itself when the player is near.

If the player gets close enough, they can hear a growling noise. The mushroom man will then pull itself out of the ground and charge at the player, exploding once reaching them in melee range, dealing heavy damage to anything close and killing itself in the process.

If the Mushroom Man doesn't manage to catch the player after awhile, it will explode on the spot. 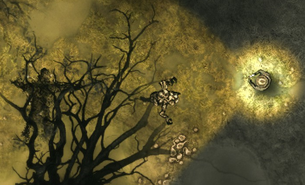 A Mushroom Man charging at the player. Note the indentation it left on the ground.

Mushroom man exploding.
Add a photo to this gallery
Retrieved from "https://darkwood.fandom.com/wiki/Mushroom_Man?oldid=24926"
Community content is available under CC-BY-SA unless otherwise noted.