For other uses, see Mushrooms (disambiguation).

Mushrooms are a type of Interactive scenery which can be found in clusters on the map. Stepping on any mushroom patch will cause poisoning. There are several types of mushroom patches, each with their own characteristics, listed below:

Poisonous mushrooms are clusters of small, pale white mushrooms which cannot be harvested. These mushrooms spawn all across the map, including in a minor location in all Chapter 1 biomes, where an entire field is littered with them.

These reddish mushrooms appear in pulsating clusters. They appear in pre-determined places in various locations, and can be harvested for an Odd-Looking Mushroom.

Large Mushrooms bear a very similar appearance to poisonous harvestable mushrooms, except that the patch is slightly larger. Mechanically they function almost identically: harvesting these patches yields an Odd-Looking Mushroom, though the harvesting process takes longer.

The previous design of Mushrooms.

Mushroom remains, before the redesign.

Large mushrooms, as seen in-game prior to Alpha 5.0.

The harvestable Poisonous Mushroom variant, as seen on the game files. 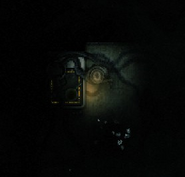 Harvestable poisonous mushrooms spawning in front of the player, during the night.

Harvestable mushrooms seen growing on a dead animal.
Add a photo to this gallery
Retrieved from "https://darkwood.fandom.com/wiki/Mushrooms?oldid=20050"
Community content is available under CC-BY-SA unless otherwise noted.