Start a Wiki
This article is a stub. You can help Darkwood Wiki by expanding it.

The Note - desertion #1 can be found in the Old Woods Hideout. The note read:

"Who the hell are they assigning to us?
Maciek fucked off from the shack. The whole night he was rambling about some Marek. I think it's his younger brother or son. I don't know if it was the boredom or the stress that got to him, but it was fucking unbearable. It was the third night in the row.
We tried to silence him, but it's fucking Maciek. Better not risk it. I slid inside my sleeping bag and zipped it shut. I prefered to suffocate in my own stench than listen to that fuckhead go on and on about it. After a while I realized Maciek is not there anymore. He left around morning. He took all his equipment, 3 litres of water, a sleeping bag, radio, gun, gasoline, flamethrower, his beloved spitter and his "lucky" stone. He only left the hazard suit. We're debating on whether to report this. No one's crazy about running around the woods, looking for a psycho with a flamethrower.

Hope he doesn't come back at night.

We reported it. They're sending 7 men to search for him. We're coming back through the tunnel." 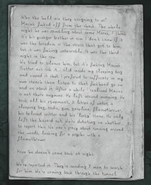 Note - desertion #1
Add a photo to this gallery
Retrieved from "https://darkwood.fandom.com/wiki/Note_-_Desertion?oldid=23806"
Community content is available under CC-BY-SA unless otherwise noted.