The larger shed houses the Sow, and a villager can be found in the second room of the small house who will attack if one lingers too long or attacks him first, saying "Get out of here, you fucking freak!"

There is a generator and a lever in the small house as well, and a broken cable outside the shed. These can be used in conjunction to stun or kill the Sow.

In the room containing the generator, the Mirror can also be encountered.

Outside one of the pig pens, some villagers can be found talking about how they had to kill a pig who was a sort of pet for another villager, and how they would not have been forced to do that if "some asshole hadn't cut the cables". Inside, a Villager will threaten the player, and become aggressive if he disobeys the order to not come any closer. 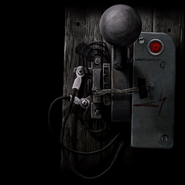 Add a photo to this gallery
Retrieved from "https://darkwood.fandom.com/wiki/Pig_Shed?oldid=23499"
Community content is available under CC-BY-SA unless otherwise noted.