The Radio Tower is a major location found on the outskirts of the Swamp. There notably is no Deep Water in this area, likely due to the fact that a radio tower would be built on higher ground.

It is highly recommended to discover the holes shortcut to the Swamp Hideout first, as you need a lot of time to investigate the Radio Tower and find your way to the Radio Tower Bunker entrance.

The area is a tangle of wires, steel, bones and twigs, to make a large nesting ground for the Banshee Babies. Around 20 can be found roosting in the area. They could not be interacted with by the player outside of this. Three Glares can be found nearby - which have to be traversed through a box puzzle.

The network of sprawling paths give multiple ways to traverse the area, some are safer than others. Each of them however lead back to the locked central building where rusted, dysfunctional radio equipment can be found inside.

Many of the skeletal corpses scattered around include such loot as 9V Batteries, Shotgun Shells, Flares, a Flashlight, Journal from the Radio Tower #2 and so on. There is also a Compressor Parts and an Underground Entrance similar to the one found in Chapter 1, but be careful, there are dangerous Banshees in this area.

The Radio Tower Bunker leads to the end of Chapter 2 and to the Epilogue. WATCH-OUT: you only have one chance to find the way without dying. (After the Epilogue, it is not possible to go on playing the game. You may only re-do the Epilogue after finishing the game).

If the player gets killed in the Train Wreck dream, the doctor's camp can be found near the entrance of the Radio Tower after a few days in the Swamp. The location has a bed, a campfire and a sack containing loot: a Burned Page With a Map, a Camera (mud) and a Torn Page From a Journal #1. 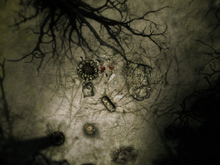 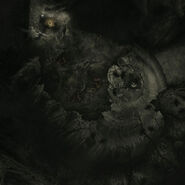 The Snail's shell blocking a path behind the tower.

A pile of bones, bodies and a savage

A weeping Banshee and a dead Banshee Baby 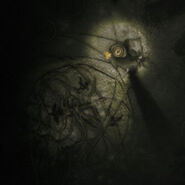 A strange hybrid human-crow corpse hidden behind the Radio Tower. This is suggested to be how the Banshees are created.
Add a photo to this gallery
Retrieved from "https://darkwood.fandom.com/wiki/Radio_Tower?oldid=24328"
Community content is available under CC-BY-SA unless otherwise noted.