This article is in need of a cleanup. You can help Darkwood Wiki by editing it.

The Radio Tower Bunker is a major location in the Swamp and one possible way that leads to the end of Chapter 2 and the Epilogue. The bunker can be entered via the underground entrance found inside the Radio Tower building.

Immediately after entering the bunker, there is a crate containing both a Military Flashlight and the Journal from the Radio Tower.

If you enter the second metal door (you need to close the first one to open it) you come to a tunnel that leads to a metal lever, but some kind of fungus grows on it, blocking the way up.

You need to burn it first with a Molotov Cocktail, or hit it with a melee weapon, to enter the Final Dreamscene.

There are two gaping, mutated mouth that can be found here. The first one can be found to the south of the metal lever, and it speaks:"You only have one chance...". The second one can be found behind the blocked metal door, which can only be accessed if the player survives the dream.

WATCH-OUT: You only have one chance to find the way without dying. The first metal door can be opened again using the metal lever after the dream ends (After the Epilogue, it is possible to replay the Epilogue)

A possible tactic can be read here, but if you want to try it by yourself don't read it! Major spoilers of enemies and upcoming scenes... 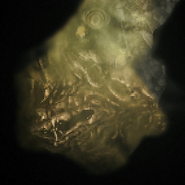 "You only have one chance..."
Add a photo to this gallery
Retrieved from "https://darkwood.fandom.com/wiki/Radio_Tower_Bunker?oldid=25517"
Community content is available under CC-BY-SA unless otherwise noted.