The Road to Home is one of the final locations in Darkwood. It leads to the heart of the woods, where The Being resides. Based on the decisions made in Chapter 2, there are potentially accessible areas that can be explored.

A military camp can be located up here in the northern part of the map. It is uninhabited, save for several corpses, one of which contains an Assault Rifle. Searching around here, you can find several items of interest, along with The Three. They cannot be interacted with. Going south will lead you to a door that goes to the road itself.

This area is only accessible if you have completed the Final Dreamscene, in which case you wind up here.

The Road to Home is a large paved road with a few houses alongside it. Here, dozens of petrified people, animals, and other dead creatures can be seen trying to make it to an unknown location, either trying to make their way out of the forest, or to The Being itself. It seems that the white goo seeping through the cracks in the road have petrified them. This phenomenon can be seen throughout the Swamp.

Based on your decisions, the Cripple can be found here, alive, and slowly crawling across the road, eventually stopping out of exhaustion. Killing him yields no items. Alternatively, if you haven't burned the Talking Tree, you can interact with it, where it thanks you for sparing it.

Continuing further will lead you to a dead end, with a clearing diverging away from the road and deeper into the forest.

A fallen sign next to the road that reads "Darkwood"

Several rooted humans towards the end of the road

The lone Scarecrow on the northern fields 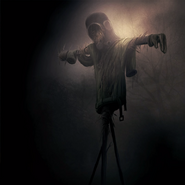 The military hideout in the north

Large roots below the ground with a device attached to them

Fallen Talking Tree
Add a photo to this gallery
Retrieved from "https://darkwood.fandom.com/wiki/Road_to_Home?oldid=24023"
Community content is available under CC-BY-SA unless otherwise noted.