The Rocks are somewhat generic locations present in all Biomes. Generally, they'll contain either a crate with loot or some type of corpse with some Creatures feeding on it. 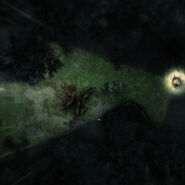 Dry Meadow rocks with feeding Dogs.
Add a photo to this gallery
Retrieved from "https://darkwood.fandom.com/wiki/Rocks?oldid=23949"
Community content is available under CC-BY-SA unless otherwise noted.