For the other hideouts, see Hideout.

The Silent Forest hideout is a major location in Darkwood.

Located in the Silent Forest, this is the player's second safe house. It is also where the player encounters the Bike Man for the first time.

Silent Forest Hideout is slightly bigger than the First Hideout, making it a bit trickier to defend at night. It consists of two main buildings:

The shed has 2 rooms, one is separated halfway and has a large hole in the wall, the other has the generator in it.

The main house has 7 rooms, 2 of which have collapsed walls. The other 5 rooms are connected with only one door, which is in the center of the house where the bathtub is. The area with the welcome mat is the front door, meaning any knocking events will come from there. From the welcome mat room, there are 2 doors, one of which is broken. Next to that is 2 large rooms, they contain a chair, table, small wardrobe, and an immovable shelf which can be looted. Going through the functional door leads you to what is seemingly the bathroom, as there is a bathtub and some clothes on the floor, along with some large mushrooms in the corner. Going through the hole in the wall will lead you to the room with the workbench and the oven.

While Dry Meadow Hideout had two equally good choices for the main night-defense room, The Silent Forest Hideout seems to present the oven room as an obviously better choice for the player to spend the night in. The oven room has only one window, one set of doors that lead outside and one set of doors that lead to lobby room. This place seems well suited for defending at night, because door leading to lobby does not require barricading, as the passage into oven area can be easily blocked by bathtub that is already in the room, and additionally by bringing some more furniture, for example wardrobe from the foyer. Barricading the remaining door and one window proves to be much less troubling, and any additional defense of those 3 entry points (like laying out traps) will use less resources than securing 4 windows and 3 doors situated far apart from one another in the lobby room.

Still, it must be noted that lobby area is defend-able, although it may be more challenging for new players. With 7 entrances located over much bigger area than oven room, more resources will be used to block those. What's more, any potential enemies have more possible points of entrance during the night. Defending all of those points from an attack, (especially from multiple sides) may be hard even for experienced player, not to mention a beginner. On the other hand, lobby area has its own advantages such as way more space to outmaneuver multiple enemies if they do break in. Oven room may prove to be too tight and player can easily get surrounded in corner, or can walk into one of their own traps.

The crate in the barn can only be unlocked by using the Chest Key. The crate most notably contains a Watch and a Metal Pipe, among some more common things. 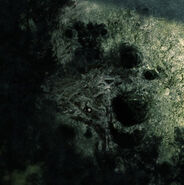 The Holes to the Village, as seen in-game.
Add a photo to this gallery
Retrieved from "https://darkwood.fandom.com/wiki/Silent_Forest_Hideout?oldid=25420"
Community content is available under CC-BY-SA unless otherwise noted.