The Apartment is a Dream Sequence encountered after reaching Dose Tier 2, 3 or 4.

The entirety of the dream takes place in The Apartment.

A younger, healthier version of the Protagonist wakes up from his bed (with a woman sleeping beside him) to prepare for the morning. He turns on the Tv and it plays:

"Yay!
Stars are falling from the sky!
They twinkle first
and then they fall straight into your paws!
But Floppy Bear,
these are not stars.
It's snow.
What are you talking about!
These are surely stars.
I can see."

The lights go out and the player can hear loud knocks at the door. Upon answering it, the Protagonist is greeted by an older version of himself (his present self), which causes him to wake back up in Darkwood.

The player can also avoid looking at the Protagonist, walk down the dark hallway and end the dream. Alternatively, if the player is careful enough, they can walk closely to the wall on the right and find a hidden door which leads to a dark secret passageway full of chairs, Shiny Stones and some kind of glimmering lights similar to stars. Eventually, the player reaches a Tv in the middle of the passageway and the dream ends.

There are several ways the dream can end: 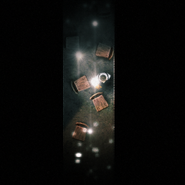 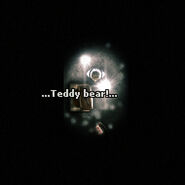 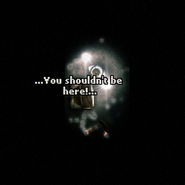 Add a photo to this gallery
Retrieved from "https://darkwood.fandom.com/wiki/The_Apartment_(dream)?oldid=24638"
Community content is available under CC-BY-SA unless otherwise noted.