Not to be confused with Church Ruins.

The Church is a dream sequence encountered after reaching Dose Tier 2 or 3. The location can also be found in the real world by the name of Church Ruins, which is an area in the Old Woods.

After a short walk, the player will find themselves in front of a church. Next to the church, the player will encounter the Madman who tells them to "stand in the line". The inside of the church is heavily damaged. Behind an altar is a trapdoor, which is locked with a code. If the player approaches it, a line of people will appear behind them, shouting that they need to wait in the line like the rest of them.

Near the trapdoor is a crate which contains a Lockpick. After picking the lock on a door near the altar, the player can enter a room with a wardrobe that contains the Strange Box and an Axe.

After the strange box is picked up, a Black Chomper will appear outside the room where the player entered the church. It repeats the mantra (referring to Burned Houses):

The player can choose to fight or run from the Black Chomper.

To escape, the player must break down the window in the room using the axe. Outside, a Lockpick on the nearby corpse can be used to open a locked gate, entering which will end the dream.

If the player manages to kill the Black Chomper, the Medallion can be found on its corpse, which contains the code for the trapdoor behind the altar.

There are several ways the dream can end, each with consequences.

Every conclusion will result in the Strange Box appearing in the player's inventory in the real world. 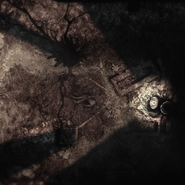 The trapdoor, the line of people waiting and the sick people.
Community content is available under CC-BY-SA unless otherwise noted.