The Village is a major location in Darkwood's Chapter 1.

The Village is a rural settlement with a small population. About a dozen or so villagers and infected villagers are spread throughout the houses here. They commonly drop medical supplies, Potatoes, and Jars with Meat.

Time Freeze is active while in the Village, which is fortunate, considering it contains a copious amount of loot. Combined with the shortcut to the Hideout, this makes the Village an excellent stocking-up point in the early game.

The Village is reliant on The Sow for the majority of its food. Because the Sow is starving, the village is facing a famine. If the player kills the Sow, upon next visit they will see a circle of villagers around the charred corpse of the Sow, praying for its resurrection.

Right after entering the Village, its Village Shrine can be seen, which contains a Shiny Stone that the player can choose to steal. A crop field with a lone villager lies nearby.

From the Village's entrance, two paths lead further in. One of them leads to Janek's House, where the player can find the Key Covered in Chicken Feces, which has to be recovered at some point to progress further through the game. Initially barricaded, Janek's House is accessed through the tunnels underneath the Village Well.

The other path from the entrance leads over a wooden bridge to the Village's center with the Crematorium and the Butcher's House. Here the path splits again, one of them leading to the Mayor's House and the Barn, the other one to the the burned remains of Hanuska's House and finally to the Chicken Lady House.

The Crematorium in the center of the Village is a large compound blocked off by a wall. It can be accessed by picking the lock on the barn door. Two bread ovens can be found within, presumably used to burn the dead villagers. A dozen or so burned corpses are found in a locked room, from which can be looted multiple Ropes and Wires.

The Butcher's House, directly adjacent to the Crematorium, is a well-preserved building where a friendly villager, most likely the butcher, resides. Some minor unique items like Jars with Meat and the Meat Grinder can be found within it.

Behind the Butcher's House is a set of large holes dug in the earth—one of which, when entered, unlocks a shortcut that allows the player to instantly warp between the Village and the Silent Forest Hideout.

Following the path alongside the Crematorium, Hanuska's House, can be next to the river, a cottage that has been mostly burnt down. Among the ruins, a lone woman sits on a chair, who is Hanuska, the former owner of this house. Killing her yields a Cable and a Knife, a quest item used in the Pig Shed in the Silent Forest. This shows that she sabotaged the cables for shocking The Sow.

Further down the path, past Hanuska's House, the Chicken Lady can be found in the her house, with her sister, the Pretty Lady, locked in one of the back rooms. The Musician also makes his first appearance there, although he will later relocate to the Silo in the Silent Forest.

The house behind the Chicken Lady's House contains a burned corpse next to an oven. The corpse is wrapped in a Chain, which can be used to access the Village Well.

The Mayor of the village can be found in his house following one of the paths past the Crematorium. The house can be accessed once the Sow is killed, at which point the player can also enter the Village Cellar from within it. Behind the Mayor's house, the Village Barn can be found, which contains a Map, the Madman Scribbles #1, and some other minor loot

The path past the Mayor's House leads straight towards the broken Village Well, which can only be entered by repairing it with a Chain. Inside the well, there is a large system of underground tunnels, one of which leads inside the barred Janek's House.

Some other minor buildings can be found in the back parts of the Village, with assorted loot inside them and some villagers nearby.

The Village is rife with items that can be looted. Several of which are plot items.

The bridge leading to the center of the Village

Some Chickens and Pigs roaming near the Mayor's House

The bonfire near the Village's center, containing the burned Doctor's Bag. 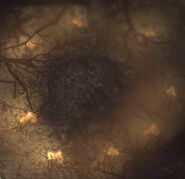 The villagers mourning the dead Sow.
Community content is available under CC-BY-SA unless otherwise noted.