The Village (also called Tree Village, among other names) is a location in the Swamp biome. It is a very large complex of small rooms and houses, where a large amount of individuals used to live. A disaster - perhaps the combination of plagues and the isolation from the outside world (see below) - has lead to the death of most villagers, with the exception of the Cripple and those part of the Talking Tree.

It can be very difficult to navigate inside the Village, with its claustrophobic and flooded environments adding to the danger posed by the creatures present there.

When the Protagonist encounters the Cripple, it is revealed (through the initial dialogue and clicking the Gossip option) that the Village used to be the entry point to and from the outside world - and people regularly traveled through it. However, the Talking Tree grew on it, blocking the way out and isolating the swamp from the other areas.

The Cripple then proceeds to beg the player to destroy the Tree, claiming it cannot bear listening to its cries for one more night. Indeed, the Tree constantly emits a distorted mumbling of voices.

However, it is revealed later on that the Road to Home only leads deeper into the woods, towards The Being. 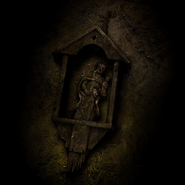 The figure of the shrine bears the signs of teeth. It's partially eaten

The house with a floral doormat 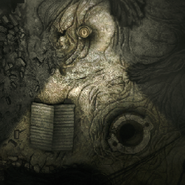 A dog house and a well 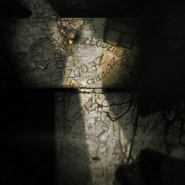 The word "thieves" has been scratched out on the floor
Add a photo to this gallery
Retrieved from "https://darkwood.fandom.com/wiki/Village_(Swamp)?oldid=21790"
Community content is available under CC-BY-SA unless otherwise noted.