The Village Well is a dark, maze-like catacomb accessed by lowering a Chain down the well in The Village. The area is filled with harvestable Mushrooms and the ground is riddled with several strange drawings, some slightly reminiscent of the savage Markings.

The area is inhabited by a single tiny Red Chomper that stalks the maze, that drops the Doll (Unburned) when killed.

The creature is Hanuska's child, who was taken away by the other villagers. 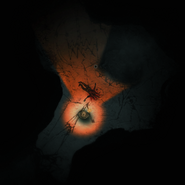 Tiny Red Chomper killed.
Add a photo to this gallery
Retrieved from "https://darkwood.fandom.com/wiki/Village_Well?oldid=23383"
Community content is available under CC-BY-SA unless otherwise noted.